Growing Up Scribe (or, The Face Launched a Life)

I’ve been captivated so many times in my life. Oh so many times. So many times I can’t remember them all. But I can specifically recall the very first time in my life I was mesmerized. I was 10 years old. And it was by this face: 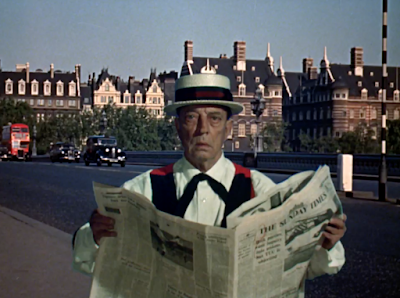 Let’s start at the beginning. If you were a kid, like me, growing up in Canada in the 1970s, you were fed a steady diet of National Film Board of Canada product in school. These films were pure, undistilled Canadian propaganda, scratchy, splicey, thick-as-maple-syrup reinforcements of your heritage like “The Log Jammer’s Waltz” or the scratch animations of Norman McLaren.  Kinda boring for a 10-year old but, when that 16mm Bell & Howell projector was wheeled into the classroom, at least you knew you didn’t have to learn anything for the next half hour or so…Eventually, the schoolday matinee was an NFB production called “The Railrodder” – by all expectations, yet another cut and dried “hooray for Canada” epic showing us big pine trees, wide open prairies, and majestic mountains, from Atlantic to Pacific. But who was looking at the splendour of our Dominion when there was this… 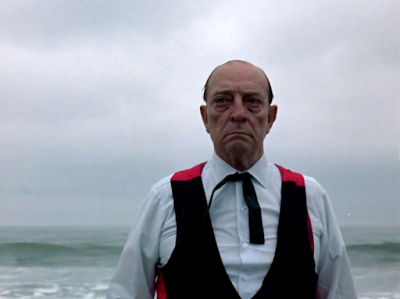 It didn’t take long for the aforementioned mesmerization (yep, it’s a word) to strike. My god, look at that man’s face. The huge, world weary eyes. The unsmiling, resigned-to-fate countenance. The underlying look of determined curiosity. I’d never seen anything like it before. It wasn’t funny, it was haunting. Baffling. Beautiful. I was all in.Buster. Keaton. Suddenly, drawing this odd man became a fixation. Art projects were watercolours of Buster jumping into the Thames River, or Buster in faux Group of Seven (remember, this is Canada in the ‘70s) facsimiles. Art teachers were not impressed.Fast forward one year. My homeroom teacher (for history’s sake, his name was Mr. Dearing) screened another yet 16mm film. Not from the NFB, this time. This one was called “The General”. And it wasn’t in colour. It was black & white. A few minutes in, my keen, perceptive eye told me, “Wait, a minute, it’s that same guy! But he’s young!” From there, of course, logic dictated that this “Buster Keaton” man was someone who made movies on trains where you didn’t talk. Well, that was weird thing for a guy to do. I became curiouser and curiouser.

Now around this same time, something else came along. Old two-reelers on Channel 9 in Windsor. Suddenly, The Three Stooges, The Little Rascals and Laurel & Hardy were frequent visitors to my brainpan. Oh, on occasion, that strange old man would show up on TV – in 4 pm after-school airings of “War, Italian Style” or “How To Stuff a Wild Bikini” – but for the most part I was enthralled by Larry, Moe and Curly, Spanky and Alfalfa, and Stan & Ollie. Oh boy, Stan & Ollie. I couldn’t get enough of them. (Still can’t, which you’ll probably find out in future postings, but I digress.) 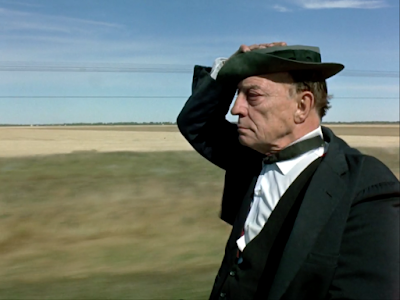 That said, if Laurel & Hardy became my obsession, Buster Keaton was my archangel. Here's why:

”The Railrodder" made me what I am today. I have no idea what I’d be, where I’d be, who I’d be, if I’d never seen that film. It triggered an all-encompassing infatuation with comedy. W.C Fields, the Marx Brothers, Chaplin, Lloyd, Abbott & Costello, Harry Langdon, Larry Semon, you name them. Easy Street, Saturday Afternoon, Cops, Bumping Onto Broadway.  From there, it fell like dominoes. When it wasn’t slapstick films (Blackhawk 8mms, so many Blackhawk 8mms!), it was old-time radio. When it wasn’t radio, it was cartoons… is there anything greater than Fleischer Popeyes? That turned into a desire to be a cartoonist. I went to college to learn advertising design and illustration. When I graduated without the least ability to get a job in that field, the accumulated hours and hours of radio comedy was my salvation. I dredged up everything I learned from listening to Jack Benny, Fibber McGee & Molly and Burns & Allen and got a job writing radio commercials.

Then, one bored weekend, I took a trip to Toronto and, it being the era of SCTV and SNL, took in an improv comedy show. In that dank basement theatre, I was mesmerized a second time – by a devastatingly funny woman. Y’know what I did? I quit my job, moved to the big city and took improv classes at Second City. Long story short, blah blah blah, I got a new job writing ad copy, climbed the agency ladder and, arguably, succeeded. In the years since I’ve traveled to Los Angeles, Washington, Italy, Holland – even to Syracuse – where I’ve hobnobbed with people who were similarly affected by Buster and his confederates. I even spent a few hours one autumn day at the home of Gerald Potterton, the (amazing and generous) man who directed “The Railrodder”. Oh, and I married that devastatingly funny woman. This year we celebrate  our 30th anniversary.

To which I can only say, thanks funny strange old man who makes movies on trains where you don’t talk.