Laurel and Hardy. Alive and kicking. 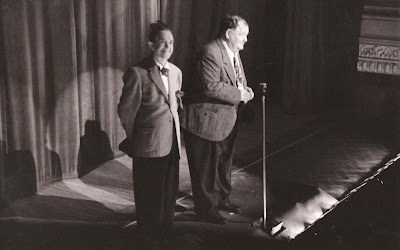 I grew up watching the classic comedians in their classic comedy films. That’s where I first fell in love with them, in these perfectly crafted films created in their perfectly controlled environments.

It wasn’t until years later — thanks to public domain VHS tapes and, later, YouTube — that I got to see a lot of these acts in their natural habitat: live, on stage, via television. That’s where you get to witness the lightning-in-a-bottle of so many of these “you really had to see them in the flesh to appreciate them” acts, despite celluloid’s best efforts.

Abbott & Costello chew up the scenery with ruthless abandon on the Colgate Comedy Hour, as do the unleashed and unhinged Martin & Lewis (who always seemed particularly shackled in their Paramount films). Even the Curly-Joe De Rita haters have to agree that that the Phase 4 Stooges really come to life when you see them live on the Steve Allen and Ed Sullivan Shows. (Now imagine seeing the original Curly Howard live… now that would be something.)

And while none of us alive ever had the pleasure of seeing The Marx Brothers at full throttle in “The Cocoanuts” or “Animal Crackers” (unless you’re really, really old, in which case, thank you for taking the precious time to read this blog), we can still catch glimmers of Harpo and Chico in action on kinescopes. Even Buster Keaton left a legacy of “live” recordings behind.

But wait. Who’s missing from this list? Stan Laurel and Oliver Hardy.

There is absolutely NO true filmed record of Laurel & Hardy performing live, in character, on stage. None.* So what’s that leave us with? Audio, precious, precious audio — via two complete stage performances unearthed in two separate but wonderful book/CD releases: “Laurel & Hardy On Stage!” by John Tefteller, with assistance from Randy Skretvedt and Peter Mikkelson, and “Spot On!” (love those exclamation points!) from Michael Ehret and Nico Cartenstadt. That these two books came out within two years of each other is like getting two Holy Grails for two Christmases.

Now, of course, the difference between Laurel & Hardy and the acts mentioned earlier is that Laurel & Hardy were born of film, not the stage. Yes, both performed on stage individually early in their careers, before they met (Laurel more so than Hardy), but their characters, their rhythms, their nuances, their every behaviour were created within the Hal Roach Studios walls. They only took to the stage out of jobless necessity, once Hollywood dismissed them. That’s why these recordings are a revelation.

Away from the studios and forced into a new reality, Laurel & Hardy adapt freely and easily into their new milieu. And they’re so… happy. 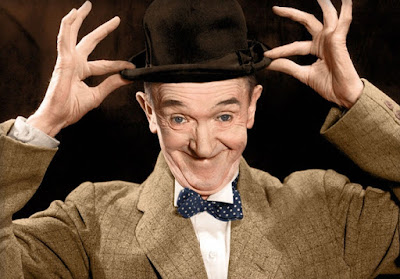 After so many dismal years toiling at Fox and MGM (and there’s times in those first films when Stan looks downright suicidal), the boys have entered an obviously joyous — and well deserved — third act. You can hear it, it’s indisputable, it’s on tape. The rapturous laughter these two “has-beens” (in Hollywood’s minds and, therefore, likely their own) receive from the audience must have boggled their brains.

So what did Stan & Babe give the audience in return? They gave their all.

“The Driver’s License Sketch”, recorded in Copenhagen in October 4 (or 5) 1947, starts with much stamping and whistling from the audience as “The Cuckoo Song” heralds their entrance. It’s obvious this is going to be a lovefest.

Now this sketch isn’t totally unfamiliar. An abbreviated version of the script was first published in John McCabe’s “The Comedy World of Stan Laurel” in 1974, and for 40+ years that had to suffice. It reads funny enough, with exchanges such as:

COP: Have you ever been arrested for breaking the traffic laws?
OLLIE: Oh, yes sir. For speeding once.
COP: Speeding? How fast were you going?
OLLIE: Ten miles an hour.
COP: Ten miles an hour? That’s not speeding, my dear boy. You can go ten miles an hour any place.
STAN: Not on the sidewalk, could you, Ollie?
Anyone who’s seen Stan & Ollie can pretty much imagine that scene in their mind’s eye, so that helps. But imagination and “the real thing” are two different animals, and there’s a happy looseness to the performance that can’t be captured on the printed page. It’s the Stan and Ollie we know from their films, but more carefree. In the end, when Babe bids the audience adieu with a final, “Good night and God bless”, you get the sense that it’s Stan and Babe who truly feel blessed.


“Spot On!” propels us five years into they boys’ future to their 1952 British Tour — specifically April 1952 and the Empire Theatre in Nottingham, England. For anyone who thinks that “Atoll K”/“Utopia” (a film I happen to love, but that’s a different story) was some sort of depressing final curtain for Laurel & Hardy, well, the tapes tell a different tale.
McCabe, again in “The Comedy World of Stan Laurel”, called it “a sketch he (Stan) later destroyed because of its inadequacy”. Well, I guess the audience’s definition of inadequacy was miles aways from Stan’s. Lord, just based on the laughter alone, how I’d love to be able to see this act. And look, it seems Stan Laurel agrees with me:

“I think this was one of the funniest routines we ever did, on many occasions we received great applause, the audience became hysterical - I regret that this act was never photographed.” - Stan Laurel to the anonymous recipient of the “On The Spot” tape

Surprisingly, “On The Spot” (aka “A Spot Of Trouble”) comes across as even more deliriously funny than “The Driver’s License Sketch”. These are two “aging” comics getting by on audience nostalgia? You could’ve fooled me.

Based loosely on their 1930 film “Night Owls”, the 20-minute sketch is broken into two acts: the first somewhat verbal, the second almost entirely pantomime. Stan is gloriously goofy throughout Act One, and unashamedly so. When he told McCabe, “Of course in music hall… you have to be broader, and you get more unreal”, he wasn’t kidding. “The fiddle and the bow” (as New York Times famously dubbed them) are playing the audience like a violin.

When you hear them reenacting the totally physical “two men in a bed” routine from “Berth Marks” (here on a railway station bench), the laughter is practically deafening — and that’s the maddening part. Essentially you’re left watching two of the world’s greatest pantomimists blindfolded. It’s like listening to The Beatles with earplugs. It’s almost cruel.

Fortunately, both books come compete with original scripts (Stan may have destroyed his original of “On The Spot”, but apparently Babe kept at least three iterations) so you can read along with the recordings. I’ll let the books themselves tell the history of these discoveries, their origins and how the recordings happily ended up in the able — and mighty generous — hands of Mr. Tefteller and Mr. Ehret. All I’ll say is “thank you” to everyone involved in bringing these recordings to light. You’ve done a great service to Mr. Laurel & Mr. Hardy.

Because, honest to god, if you could capture love on magnetic tape, that’s what’s done here. The love of audiences for Stan & Ollie during their lifetime. Stan and Babe’s love of performing. And the love between two men operating in perfect synch… this playful, joyful fiddle and bow.

But don't just read about them. Buy the books! 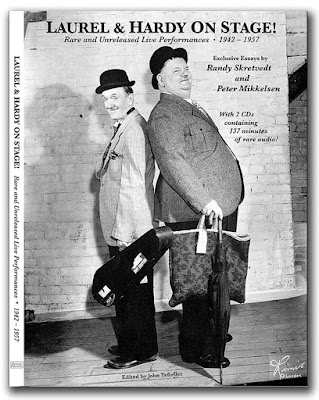 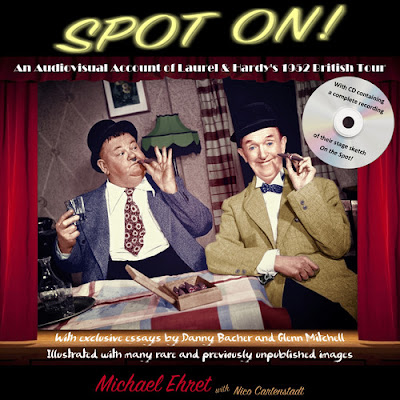 *16mm silent home movie footage of Stan and Babe performing the Driver’s License Sketch exists, and may make it to DVD one day.
All images and audio courtesy of John Tefteller and Michael Ehret.
Laurel & Hardy: On Stage! is available at http://laurelandhardyonstage.com/
Laurel & Hardy: Spot On! is available at https://www.laurel-hardy-publications.com/spot-on
Posted by The Scribe Files at 12:06 8 comments:

On the authenticity of Buster Keaton

I've seen Buster Keaton’s The Railrodder a zillion times. It was the first Buster Keaton movie I saw as a kid and, if I'm lucky, it'll be the last one I see on my deathbed.

And speaking of lucky, a few weeks ago I had the rather insane pleasure of spending the day with the film’s director Gerald Potterton. Together we sat and watched an hour or so worth of outtakes from the shooting of the film, recording our conversation for Cinemuseum’s upcoming blu-ray collection, Blue Collar Buster Keaton. More specifically, these outtakes were culled from the “making of” documentary filmed during production, Buster Keaton Rides Again — a close runner up for the zillion views record.

Watching the outtakes (and a further hour’s more I set aside) for these films I’d seen again and again and again, I noticed something for the first time. And how oh how had I never seen it before? At no point do we see a double for Buster. No stand-in wearing a porkpie and slapshoes; no stuntman waiting around to do the dangerous stuff.

But boy, did he ever deserve one. At the beginning of The Railrodder, Buster emerges from the Atlantic Ocean. The scene was shot off the coast of Lawrencetown, Nova Scotia in late September 1964… and I can guarantee that water was beyond freezing. (Trust me, I’ve been in the Canadian Atlantic in July and that was an endurance test.) Yet Buster trudges out of the brutal sea time and time again in infinite variations of the same scene — wearing a straw boater, wearing his trademark porkpie, no hat, jacket on, jacket off — even in his rusty old age, a bit of water isn’t going to stop the little iron man.

Now reality is, Buster had come to rely on stuntmen at this point in his life. They’re pretty obvious in A Funny Thing Happened To The Way To The Forum and The Scribe. But that was more to accommodate his four-packs-of-Winstons-a-day ravaged lungs than his ability to face danger or the elements.

Which leads me to a scene in Buster Keaton Rides Again, a pretty contentious one where Buster bickers with director Potterton. Essentially, Potterton has an idea for a gag: Buster’s putt-putt is doomed for a head-on collision with some other speeders over a mile-high trestle bridge.  Potterton even sketches it out for him, but Keaton doesn’t think too much of the gag. (“Getting on it, getting scared, isn’t going to mean anything.”) So he suggests amping it up somehow — let me be engulfed by a giant map caught in the wind. Potterton vetoes it…. it’s too dangerous.

So they shoot it Potterton’s way. Then Buster goes away and stews about it overnight. He grumbles, he fumes, he bitches to Eleanor about it. (“That is not dangerous, that’s child’s play, for the love of Mike. I do worse things in my sleep than that.”) Then they shoot it Buster’s way.


Now when you watch the finished scene, there is absolutely no way you can technically spot that it’s Buster. He’s obscured from the waist up in the giant map. The scene is shot from what seems to be five miles away, so the figure on the scooter is literally a dot. It could have been a double or a dummy for all anybody cared. 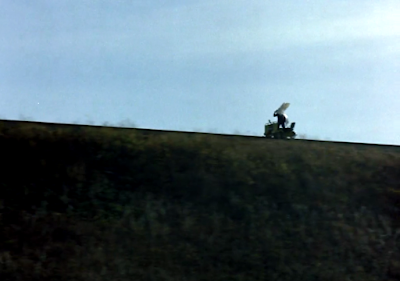 So why the battle? Why push so hard for something that really doesn’t matter. For something where nobody — nobody — would know the difference.