When did Laurel & Hardy 'jump the shark'?

jump the shark:
(verb) the moment an area of pop culture (TV or movie series, music or performer) is considered to have passed its peak – referring to a scene in the TV series Happy Days when its popular character, Fonzie, is on water skis and literally jumps over a shark.

Ask anyone who loves Laurel & Hardy: What was the turning point  in Stan & Babe’s career? The unanimous answer would be the moment they signed with 20th Century Fox. And, of course, they’d be right – to a point. Because, once that contract was signed, there was no turning back.  But the truth is Laurel & Hardy’s films, careers and on-screen personalities were spiralling into decline before they left Roach, and one has to wonder if the downward trend was irreversible.

Now don’t get me wrong. There are things I love about every Roach-produced Laurel & Hardy film, even the ones I’ll seem­ingly be criticizing shortly. And I’ll be the first to admit the above theory isn’t exactly an original observation. Charles Barr, in his 1967 book Lau­rel & Hardy, describes Stan & Babe’s final Roach films as: ‘…getting away from the real Laurel and Hardy into a more nebulous ‘gag’ cinema, the kind of comedy which it was their distinction a dozen years earlier to transform from within.’

He’s right. Starting in 1937 or so, Laurel & Hardy start to evolve from likable, not-very-bright but very-real people into broad, slapstick clowns. The Mr. Laurel & Mr. Hardy of, say, "We Faw Down" and the Stan & Ollie of "Saps At Sea" are from two completely different planets.

So what is the exact moment Laurel & Hardy ‘jumped the shark’?

Well, technically, the act of jumping involves hit­ting a peak. And when you think of all the great moments in Laurel & Hardy-dom, perhaps the greatest is the song-and-dance to ‘At The Ball’ in "Way Out West". For two magnificent min­utes, Stan & Babe stop everything to perform a charming musical number, with very obvious rear projection setting the stage.

I think the operative word here is perform. Up until this moment, Stan & Ollie had always been somewhat eccentric innocents in a slightly off-kilter world – not counting the occasional sidetrip to Toyland or neck-twisting, belly-ballooning freak ending. But with "Way Out West" a different tone starts to seep in. ‘White magic’ makes its debut, and the slapstick becomes broader (body parts are stretched and snapped not once, but twice: Stan’s big toe and Ollie’s neck). They are beginning to define themselves as clowns. Yet "Way Out West" is undeniably a Laurel & Hardy film, maybe even their best. Now, however, the jump begins its inevitable descent…

Next stop, the Alps. And downhill from here.

What happened here? Did Hal Roach commission 20th Century Fox to produce this film for him? Because "Swiss Miss" has all the trademarks of a Fox film, with a slightly larger budget – present­ing Stan & Ollie as stupid dolts in comedy un­suited to their characters (when did they become so aggressive??), providing them with unfamiliar, unfunny co-stars and an irritating love interest, and the pièce de résistance: dressing them up in funny costumes. All that’s missing are the gangsters and/or Nazis.

So with one film Laurel & Hardy lose their grip on reality, tossed into a grand, glorious, musical comedy where peasants burst into spon­taneous song and gorillas roam the mountains. The boys try to get into the spirit, even sing-songing a few words in rhyme – the remnants of a longer, deleted musical sequence. And while it’s intriguing to think of Stan & Ollie performing (there’s that word again!) in a full-scale produc­tion number, that’s really Wheeler & Woolsey’s domain. When Ollie is given the chance to sing in "Swiss Miss", he sings badly. That’s a first.

Sure, you can blame Roach – "Swiss Miss" was his idea. But the comedy within is strangely…wrong. And you can't necessarily blame Hal for that. Six years earlier in "The Music Box", Stan & Ollie carried a piano up a long flight of stairs. Their ob­stacles included a disrespectful nursemaid and a pompous professor. They carry a piano in "Swiss Miss", too. To a treehouse. Across a rickety rope bridge. Over a mountain chasm. With a drunken Stan. Where they meet the aforementioned go­rilla. Oh, one more thing, there’s supposed to be a bomb in the piano. (A bomb? Yep. Stan shot the footage, Roach cut it out. I know whose side I'm on.) This kind of hey-why-not? gagging is straight out of Sennett – or worse, Larry Semon. Even the uninspired chase finale through the kitchen cupboards was done in three previous Laurel solos. They’ll recover somewhat in their next film, but the delicate balance of their personalities has been tipped.

"Block-Heads" is generally regarded to be the last of the clas­sic Laurel & Hardy films, and in a lot of ways it is. The first 20 minutes set up Stan & Ollie as inseparable, warm-hearted friends, reunited in one of the finest set pieces ever conceived for them. Ollie mistakenly believes his long-lost pal has lost his leg in the war… a situation that’s not entirely plausible, but definitely possible. It’s perfect old-school Stan & Ollie. But after that? Out come the wacky, ‘white magic’ gags (Stan yanks down a window shade’s shadow. Stan pulls a glass of water – with ice! – from his pants pocket. Stan smokes his fist like a pipe.) – fol­lowed by a breakneck remake of "Unaccustomed As We Are". The music cue for this shift in reality is a new Marvin Hatley composition, 'The Mad Kuku'. It’s loud and frenetic, everything that Lau­rel & Hardy never were but were quickly becom­ing. Compare the last half of "Block-Heads" to its earlier incarnation. Even though "Unaccustomed As We Are" was the team’s first sound film, it’s "Block-Heads" that’s full of shouting, funny noises, and hyperactive music. Who ever thought Laurel & Hardy could be so loud?

Roach had long been toying with the idea of four-reel streamliners to battle the double-feature trend plaguing the big studios. The guinea pigs for his experiment would be Laurel & Hardy. As early as 1935 Roach had announced a four-reel Laurel & Hardy featurette, "The Honesty Racket". It wasn’t until May 1939 that the boys willingly signed a contract calling for four featurettes for 1939-40 release. Why they agreed to this is a mystery – certainly appearing on the bottom half of the bill would lead to a loss of prestige for Stan & Babe. Maybe the boys felt it would bring them closer to their two-reel roots. Or perhaps Stan saw it as a way to escape the love interests and clumsy stories Roach kept saddling them with. Either way, with "A Chump At Oxford", Laurel & Hardy relegated themselves to Hollywood’s B-list. Lavish, musical superfeatures would be re­placed by streamlined, screamlined comedies.

But exhibitors, audiences and foreign mar­kets weren’t interested in Stan & Ollie in four-reel form. So Roach had Laurel & Hardy flesh out "Chump" to feature length with a prologue re-enacting "From Soup To Nuts" (their third remake in a row – Laurel & Hardy started cannibalizing their past long before the Fox writers did). Like their recent do-over of "Unaccustomed As We Are", this lacks the charm, elegant pace, and warm characterization of the original. Ollie, as butler at the Vander Veer’s society soiree, upsets dignity through his ignorance. Not the naïve ignorance we’ve come to expect… just plain stupidity. This isn’t the Ollie we know, trying desperately to maintain decorum at all costs. Here Ollie cre­ates chaos through his own idiocy and belligerence. He tells the guests ‘you sit over there and you sit over there’. He laughs in Finlayson’s face and calls him ‘Pops’ and ‘the old guy’. He says dopey things like ‘bring yer eats with ya’. Who is this stupid man? To me, this is the least funny scene Laurel & Hardy ever filmed – if only because it’s the first time I actually felt embarrassed for Mr. Hardy. He should know better than this.

There’s a story about "Saps At Sea": Supposedly Stan walked onto the set on the first day of shooting and tore up the script. Knowing how Stan worked, this seems unlikely. Watching the film, to quote Stan in "Going Bye-Bye", ‘It could happen’. "Saps At Sea" is often said to have been inspired by Chaplin’s "Modern Times". (Assembly line = nervous breakdown.) But take a closer look, and "Saps At Sea" may be the best Three Stooges mov­ie that Laurel & Hardy ever made. The inspira­tion here isn’t Chaplin but the Stooges’ "Punch Drunks" (and "Horse’s Collars" and "Grips, Grunts and Groans" AND "Tassels In The Air"), where ex­ternal stimuli (‘Pop Goes The Weasel’, mice, Wild Hyacinth perfume, tassels) makes Curly ‘fight­ing mad’. 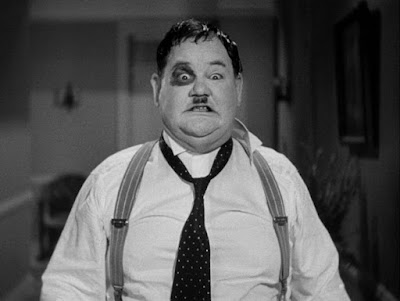 But Oliver Hardy isn’t Curly Howard. Hardy’s work should be subtle, genteel and sym­pathetic. In "Saps At Sea" it’s none of that. His hornophobia-provoked rages lack Curly’s energy and pure comic dementia. He just spends half the film yelling. Everything about "Saps At Sea" is pure Larry, Moe & Curly – right down to the boys chowing down on a synthetic meal, a gag performed with feather pillows substituting for angel cake in the Stooges’ "Uncivil Warriors". The characters are broad, the noise level is high, the plot is non-existent, and the two main sets (boarding house and rickety boat) are unbeliev­ably cheap. The one thing that isn’t Stooge-like: their thick white makeup is as obvious and unre­alistic as Groucho Marx’ greasepaint moustache. They are now officially clowns.

So if you ever wanted to speculate on what would have happened if Laurel & Hardy had gone to Jules White’s two-reel unit at Columbia Studios instead of Fox, look no further than "Saps At Sea". I’m not saying "Saps At Sea" isn’t a very funny film. There's little stuff Stan does in that first half that really makes me laugh. But, for me, the big difference is this: Anyone can eat a banana with three layers of peels. It takes someone special to charm me by eating hard boiled eggs and nuts. 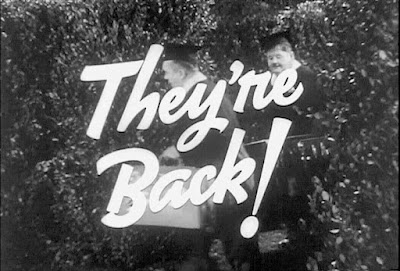 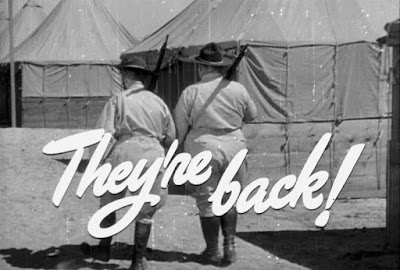 So it’s obvious that by 1940 Laurel & Hardy were at a crossroads in their career. "Flying Deuc­es" was a one-shot quickie troubled by unfamiliar production. "A Chump At Oxford" is two films slapped together as one. And "Saps At Sea" screams let’s-get-this-over-with-and-move-on. Could Stan & Babe have recalibrated themselves, returning to the humanity that helped them redefine screen comedy in the late 20’s? In essence, return to their roots? That certainly seemed to be the idea when they signed with 20th Century Fox. A press release for "Great Guns" hailed the ‘new Laurel & Hardy’ as ‘a funny and oddly-assorted pair, but not completely beyond what a person might find in real life’.

We all know the final outcome of that phi­losophy. But, in theory, it’s exactly the right idea. After all, doesn’t that describe the two gentlemen we met in "The Battle Of The Century", "Wrong Again", "Men O’War", etc.?

Where did they go?


An early version of this blog post was originally published in Nieuwe Blotto Magazine.
Posted by The Scribe Files at 10:27