‘Atoll K deserves at least a polite round of applause for being something different.’ — Scott MacGillivray, Laurel & Hardy From The Forties Forward
‘…a courageous effort to do something different, and in this respect at least it was a far more worthwhile venture than most of their later  releases.’ — William K. Everson, The Films of Laurel & Hardy
‘Weep, indeed, for the frightful vision of what was once the comic glory of the motion picture.’ — Simon Louvish, Stan and Ollie, The Roots of Comedy
‘Laurel and Hardy’s last film, to put it pleasantly, is a mess. Occasionally a nice mess, but mostly a messy mess.’ — John McCabe, Laurel & Hardy 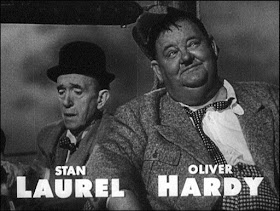 Anyone who knows me knows I have a fondness for (aka fascination with) Laurel & Hardy's last film, "Atoll K" (aka Robinson Crusoeland, aka Utopia).

The film, produced in France under ridiculously difficult circumstances and designed to jumpstart both the post-war Europe movie industry and Laurel & Hardy's languishing cinematic career, is the most divisive title in the L&H canon. Admirers of Stan & Babe have very strong opinions of the film – good, bad, but never, ever indif­ferent. Some people can't get past the first few minutes. Others steadfastly refuse to ever see it, period.

Then there's me. Read on.

Now anybody even slightly familiar with the lives of Laurel & Hardy knows the story behind Atoll K, so I won't get into the gory details behind the making. (But if you're interested in said details, I have a great suggestion at the end of this post!) 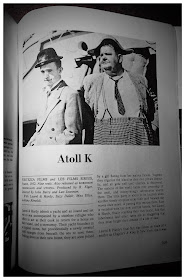 Long before the invention of $1 DVDs, where 'Utopia' reigns ubiquitous, I was fascinated by this once impossible-to-see film. I'd first read about it when I was discovering Laurel & Hardy in William K. Everson’s ‘Films of Laurel & Hardy’. Right away I fixated on Atoll K – probably in the same way someone is drawn to a car wreck. The ghoulish photo of Stan, the bizarre storyline, the fact that it was so far removed from any of their earlier work… I had to see it. It took a few years, but I finally caught a 16mm screening at the Dearborn Michigan public library. And I loved it. Why?

Okay, so you can’t forget they’re old and sick. Seriously, how can you? I mean, look at poor Mr. Laurel. But, you know what? He puts more enthusiasm into this film than all of the post-Roach films he sleepwalked through, put together. As for Mr. Hardy, any boyish expressiveness that critics of Atoll K claim Babe lacks by 1950 was well lost by 1938 – Swiss Miss seems to be the film where his cheeks squished his eyes into a permanent squint. But he gets some marvellous camera looks in (and welcome back to those!) and absolutely beams during his entrance.So here they are, getting tangled in each other’s clothes, Stan spreading jam on Ollie’s hand, splashing in wa­ter, pratfalling onto watermelons, baffling themselves with machinery. Older. Much, much older. But no wiser. Welcome back, Mr. Laurel & Mr. Hardy.


The teamwork is as sharp as ever. Let’s examine one gag, a gag that’s often criticized as a ‘fat’ joke made at Babe’s expense. Onboard their newly inherited "yacht", Stan finds an inflatable raft, which Ollie explains will hold four people. Stan ponders this for a second, then responds, ‘What about me?’. If this had been Abbott & Costello, or the Three Stooges, or Martin & Lewis, or even the Fox/MGM version of Laurel & Hardy, the remark would have been handled with a quick, angry shove.But look at the way it’s treated here. Stan insults Ollie – Why? He’s not making a wise­crack. He’s voicing a valid (in his mind) concern, but right away he regrets it – almost mid-sentence. And Ollie is hurt. Deeply. This genuinely upsets Stan. Even his conciliatory ‘yoo hoo’ won’t get his friend to look at him. Finally, he holds a hanky up to blot Ollie’s tears. Bringing the tissue to his nose, Ollie instinctively blows… only to catch himself. Then comes the angry shove.That single minute of film is the perfect précis of the the relationship between Stan & Ollie  –  the most beautiful bromance in the history of cinema. 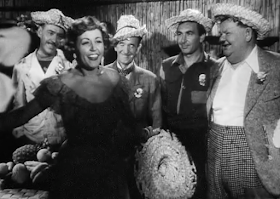 There’s also an interesting dynamic in this film. Stan and Ollie actually have friends. Oh, they've had friends before: ‘Mr. Bernard’ in Any Old Port, ‘Baldy’ in Be Big. Then there’s the boy ingénues who are bud­dies only for the purpose of plot: whiny Alan Douglas in Bonnie Scotland, expendable Eddie Smith in Pack Up Your Troubles. But generally it’s Stan and Ollie against the world. Now, when it’s the world against Stan and Ollie, they have three confederates who actually support and – surprise! – respect the boys. When Ollie takes authority as President, it’s accepted. It gives them a humanity they hadn’t had in years – the humanity that originally set them apart from the other silent comics almost a quarter century earlier, and the human­ity that 20th Century Fox bragged they were recap­turing (but bungled so badly) in 1941.Atoll K presents a mature version of the Stan and Ol­lie we originally met in 1928. Not the broad, white-faced clowns of the later Roach films. Not the stodgy dullards of the Fox/MGM years. Perhaps that’s why I like Atoll K so much: Not because of what the film contains, but what it promises. It proves that the boys never lost their comic touch, or their innate sense of who these two characters were. It shows that Laurel & Hardy could have matured and, to me, makes the ten lost years since they left Roach all the more tragic. This is the Laurel and Hardy that could have been. That should have been.

I wouldn’t have missed this final visit for the world.


An early version of this blog post was originally published in Nieuwe Blotto Magazine. For a fascinatingly in-depth exploration of the making of Atoll K, I hugely recommend Norbert Aping's 'The Final Film of Laurel and Hardy: A Study of the Chaotic Making and Marketing of Atoll K'. The author acknowledges the overuse of variations on the word 'fascinating' in this post.